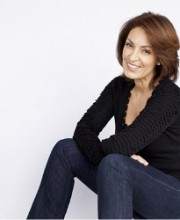 Her latest book, 10-10-10: A Life Transforming Idea, presents a powerful decision-making strategy for success at work and in parenting, love and friendship. Widely featured in major media outlets including The Today Show and Time Magazine, 10-10-10 became an instant New York Times bestseller and is now published in 29 countries worldwide.

Together with her husband Jack Welch, Suzy is also co-author of the #1 international bestseller Winning, its companion volume, Winning: The Answers, and The Welch Way, a weekly column on business and career challenges which appeared in BusinessWeek magazine from 2005-2009 and was published in 45 major newspapers across the globe by The New York Times Syndicate. In 2010, the Welches launched an online MBA program through Chancellor University.

On her own, Suzy has written extensively about work-life balance and other cultural issues for publications ranging from O, The Oprah Magazine to The Wall Street Journal. In addition, her candid and incisive commentary has made her a popular commentator on television programs including Good Morning America, The View, Morning Joe, Your World With Neil Cavuto, and Power Lunch.

Born in Portland, Oregon, Suzy received her BA from Harvard University in 1981 and then joined The Miami Herald as a reporter. She left daily journalism to attend Harvard Business School, where she graduated as a Baker Scholar in 1988. Suzy joined the Harvard Business Review in 1995 and was named editor-in-chief in 2001. During her tenure at HBR, Suzy was the author of numerous articles on leadership, change, creativity and organizational behavior, as well as the contributor to several books on management.

Suzy is the mother of 4 children and lives in New York City. She serves on the board of several non-profit organizations in the fields of education and homelessness.