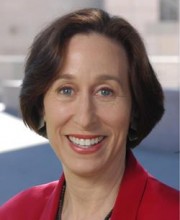 Tina Seelig is the Executive Director for the Stanford Technology Ventures Program (STVP), the entrepreneurship center at Stanford University’s School of Engineering. STVP is dedicated to accelerating high-technology entrepreneurship education and creating scholarly research on technology-based firms. STVP provides students from all majors with the entrepreneurial skills needed to use innovations to solve major world problems.

Tina teaches courses on creativity, innovation, and entrepreneurship in the department of Management Science and Engineering, and within the Hasso Plattner Institute of Design at Stanford. Tina was recently awarded the 2009 Gordon Prize from the National Academy of Engineering, recognizing her as a national leader in engineering educational. She also received the 2008 National Olympus Innovation Award, and the 2005 Stanford Tau Beta Pi Award for Excellence in Undergraduate Teaching. In 2004, STVP was named the NASDAQ Entrepreneurship Center of the Year.

Tina earned her Ph.D. from Stanford University Medical School in 1985 where she studied Neuroscience. She has worked as a management consultant for Booz, Allen, and Hamilton, as a multimedia producer at Compaq Computer Corporation, and was the founder a multimedia company called BookBrowser.

Tina has also written 15 popular science books and educational games. Her books include The Epicurean Laboratory and Incredible Edible Science, published by Scientific American; and a series of twelve games called Games for Your Brain, published by Chronicle Books. Her newest book, published by HarperCollins in Spring 2009, is titled What I Wish I Knew When I Was 20: A Crash Course on Making Your Place in the World.