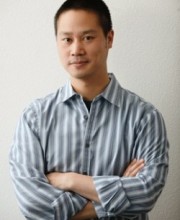 In 1999, at the age of 24, Tony Hsieh (pronounced Shay) sold LinkExchange, the company he co-founded, to Microsoft for $265 million.

He then joined us as an advisor and investor, and eventually became CEO, where he helped us grow from almost no sales to over $1 billion in gross merchandise sales annually, while simultaneously making Fortune magazines annual Best Companies to Work For list. In November 2009, Zappos.com, Inc. was acquired by Amazon.com in a deal valued at $1.2 billion on the day of closing.

His first book, “Delivering Happiness”, will be published on June 7th. http://www.deliveringhappinessbook.com.