“Social influence is as silent as it is powerful.”

Think about where you ate for lunch, or what drink you ordered on the airplane. Or maybe something bigger, like who you dated, married or voted for. It all had to do with your personal tastes, judgements and preferences – right? What if I said ‘wrong’? Actually, your choice had more to do with what others did or didn’t do.

Social influence, Jonah Berger teaches us, impacts our decisions, without us even realizing it. Other people are constantly influencing what we think, buy, and do, as well as whether we are driven to work hard or hardly work!

Want to be more influential? Make better decisions? Motivate yourself and others? This book is for you. In the five chapters Berger explores:

By understanding social influence you can harness its power and improve our own life and the lives of others.

"Whether we realize it or not, other people have a subtle and surprising impact on almost everything we do."

Remember your mother urging you to choose your friends wisely: “You will become like the five people you associate with the most,” she said. She was right!

But it’s not simple. Others can impact you to want to be exactly the same or completely different! For example, imagine you are on a bike ride. The person with you is slightly faster, which prompts you to push a bit harder and in the end you feel great; you had an awesome workout! But imagine a second scenario where the person with you is significantly faster. This prompts you to give up and turn off onto the shorter path at an easy pace. The gap seemed too large so you gave up. Berger explains that we are like Goldilocks. We avoid the extremes.

I did my own experiment after reading this. I exercise each morning with a friend. Last week, while we were following our exercise video, I deliberately lightened up (eg. I gave up early on the push ups) or pushed harder (eg. I jumped higher, put in more energy) and I watched to see if it impacted her. And you guessed it, she mirrored my energy. And when I asked her why, she did not attribute it to my behavior. It was a subconscious impact.

Even on a plane recently, after the random guy beside me ordered a water, I revised my drink and thought ‘yes, water is a healthier choice.’ Imagine the impact of your spouse’s health decisions on you! Again, choose the people around you carefully!

Imagine when the automobile was introduced, back in 1896. It was a revolutionary new technology that would enable people to travel farther, faster and safer. Yet people resisted. Even though there were drawbacks to the horse-drawn carriage, people were comfortable with it. They viewed the horseless carriage as a “Devil’s Wagon” and even instituted restrictive laws to block its intrusion.

Finally, in 1899, a clever inventor proposed a solution. To make people more comfortable with the change, he created the “Horsey Horseless.” He took a life-sized replica of a horse head, down to the shoulder and attached it to the front of a carriage.

It’s easy to laugh at the absurdity of this now. But think about how scary cars were when they were first introduced. By adding something recognizable, the novelty was less threatening and more acceptable.

Think about the icons on your computer. You click on an image of a floppy disk to save documents, and drag digital files to be thrown away in what looks like a waste bin.

When I teach speakers how to be more engaging, I encourage them to create analogies, metaphors and similes to link new concepts to familiar concepts. What are you trying to introduce and how can you make it more familiar? 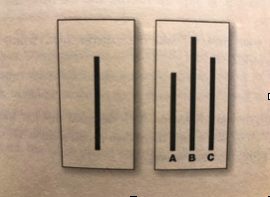 Can you identify which of lines A, B or C matches the line on the left? It seems rather obvious, right? Now, place yourself at a round table. Before you give your answer, you hear the answers of others. They are all choosing A. Will you conform to the answer given by the majority?

Shockingly 75% of participants conformed to the group at least once. Even when the answer was clearly different than the group, conformity was still rampant!  Monkey see, monkey do.

This made me think of our gluten-free phenomenon. Only 1% of Americans suffer from celiac disease. For these people, eating gluten triggers an autoimmune response that damages the intestines and keeps nutrients from being absorbed properly. Yet, the gluten-free rage is exploding.

While out for dinner last week at our favorite restaurant, we were talking with the chef. He was complaining how everyone wants “gluten free.” He was pressured to add more options to the menu; thereby begrudgingly contributing to the belief that it is bad. Monkey see, monkey do.

I wish I had read this book before my trip to Disney. Last month we waited 45 minutes for a 3-minute Peter Pan ride. Why? Because it was ranked so high! Everyone said it was the best ride. I laughed so hard when we emerged from the ride and I looked at my husband’s face. “Really?!?” he said! “We waited 45 minutes for THAT?!?” Monkey see, monkey do. No doubt, right around the corner we likely could have had just as much fun (maybe more!) without the wait! Simply being aware of the crowd mentality can go a long way toward avoiding it. Lesson learned.

A final cautionary note. It’s tempting to think about this applying only to others. Berger warns us however that “we all think we are alone in a crowd of sheep. But whether or not we are is a different story…..”

Everything I do is focused on improving patient outcomes. I do that by being a student and teacher of ethical, effective influence. I teach pharma people and health care professionals how to improve their ability to influence others...
Read More
blog comments powered by Disqus

Back to summaries
Innovative Thinking

Jonah Berger is the James G. Campbell Assistant Professor of Marketing at the Wharton School at the University of Pennsylvania. He has published...
Read More
VIEW ALL AUTHORS

Thank you for subscribing to the Actionable Books Weekly Digest.

To complete your subscription, please click the link in the email we just sent you, and we'll be sending you weekly goodies - direct to your inbox.

An error occurred while adding you to our digest:

Great! It should be a great session. All you'll need to do is read the summary (shouldn't take you more than 5 minutes), and show up. Enjoy the session!