"A noble sales purpose is the difference between a merely effective sales force and one that’s truly outstanding."

No one expected the study to reveal what it did. It was intended to identify what separated top salespeople from the average ones. The outcome? Bigger bonus? Greater product knowledge?

The top performers had one very distinguishing feature. They all had a far more pronounced sense of purpose than their average counterparts.

After six years of research and 10,000 hours of studying salespeople, sales leadership consultant, popular speaker and author Lisa Earle McLeod has no doubt about it. A noble sales purpose is the difference between a merely effective sales force and one that’s truly outstanding.

In Selling with Noble Purpose she shares the evidence behind her conviction and strategies to ignite your people (and your profits!) with their noble purpose.

There is no substitute for purpose

Would you agree that most people believe that money is the primary motivator for top salespeople? Lisa Earle McLeod shows us that they are wrong. While money is a baseline, purpose is the key.

She had her first ah-ha around the importance of the sense of purpose after a sales call with a top-producing pharma rep. She asked her:

“What’s going on in your head when you go on a sales call?”

While looking around, then lowering her voice, the rep confessed what she hadn’t told anyone before.

“When I go on sales calls, I always think about this particular patient who came up to me one day during a call on a doctor’s office.” That patient had thanked her for the drug her company made and told her how it had impacted her life. For example, she now had enough energy to get out of her house and get down on the floor and play with her grandkids.

The rep knew that the work she did was important. She was improving lives, not just pitching a product – like her counterparts were. And that’s what inspired her to make just one more sales call on a Friday afternoon.

That conversation was the spark that led to Lisa’s six year quest to uncover what goes on inside the minds of top-performing salespeople and how leaders can inspire that mindset in others.

Low and behold the research shows that the driver of serving is far greater than the driver of profit. This is repeated in the literature over and over again. For example:

Company A thinks: If we make a profit, then we can fulfill our purpose.

Company B thinks: If we fulfill our purpose, then we can make a profit.

The pharma rep from the previous example was shy to share her mindset. She obviously worked for company A. Imagine how the company would have prospered if they inspired all their people with the thinking of company B.

Here are some additional examples of the subtle differences in mindsets of average versus exceptional reps. 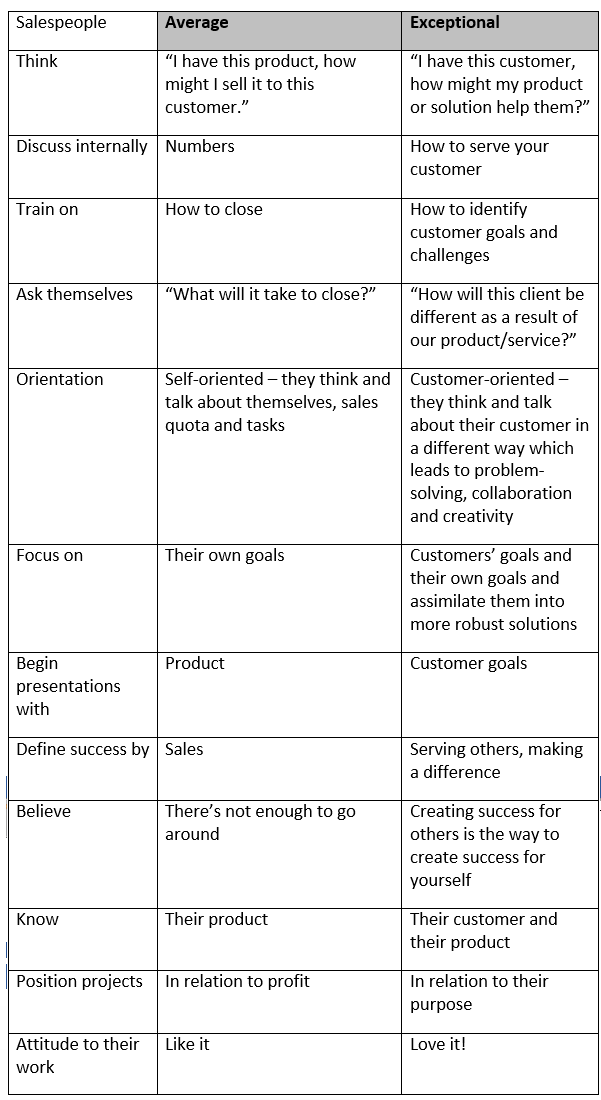 Bring purpose to the people

If all you talk about with your people is closing the deal or getting the script, then guess what they will focus on?

I was hopeful while sitting in a pharma meeting in which the senior leadership talked about the importance of being patient centric. They even brought a patient to the stage to share how the company’s medicine made the world of difference to her. I was feeling lifted. Then, smash, it all came crashing down. Immediately following these inspiring talks, every presenter talked about targets, numbers and market share.

It would have been so simple to talk about increasing the number of people we could help, instead of the percentage sales growth. Remember, what is talked about internally will be reflected externally.

Who you serve needs to be at the centre of every conversation. When you focus on serving your customer instead of the shareholder, you will see dramatically different results.

Lisa suggests you try adding this one question to your sales call review:

“How will this customer be different as a result of doing business with us?”

“How will this doctor and her patients be different as a result of this product?”

To answer that question, the rep must think about whom they are serving and what their goals and challenges are.

Lisa tells a story from a friend who says every office has a TB. “What’s a TB?” Lisa asked her.

“A true believer,” she said. “That starry-eyed optimist who still believes they can make a difference. But here’s the thing the jaded staffers don’t tell you – everyone else in the office is secretly jealous of the TB.”

You see, everyone has a secret true believer inside them, just waiting to come out. Lisa helps us ignite that true believer that lurks inside us. We all want to make a difference. Period.

Everything I do is focused on improving patient outcomes. I do that by being a student and teacher of ethical, effective influence. I teach pharma people and health care professionals how to improve their ability to influence others...
Read More
blog comments powered by Disqus

Back to summaries
Role & Culture Fit

Thank you for subscribing to the Actionable Books Weekly Digest.

To complete your subscription, please click the link in the email we just sent you, and we'll be sending you weekly goodies - direct to your inbox.

An error occurred while adding you to our digest:

Great! It should be a great session. All you'll need to do is read the summary (shouldn't take you more than 5 minutes), and show up. Enjoy the session!