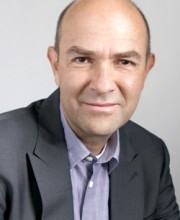 Chris Anderson is editor-in-chief of “WIRED” magazine, a position he took in 2001. During his tenure, the magazine has been nominated for nine National Magazine Award nominations and has won the prestigious top prize for general excellence three times (2005, 2007 and 2009). At the end of 2009, AdWeek honoured this consistent record of success by naming “WIRED” ‘Magazine of the Decade’. Anderson is the author of “The New York Times” bestsellers, “The Long Tail” and “FREE: The Future of a Radical Price.” He is also one of the founders of Booktour.com, a free online service that connects authors on tour with potential audiences. In April 2007, Anderson was named to the ‘Time 100,’ the news magazine’s annual list of the most influential people in the world. Previously, Anderson was at “The Economist,” where he served as U.S. business editor, Asia business editor and technology editor. Anderson’s media career began at the two premier science journals, “Nature” and “Science,” where he served in several editorial capacities. Anderson holds a Bachelor of Science degree in Physics from George Washington University and studied Quantum Mechanics and Science Journalism at the University of California at Berkeley.